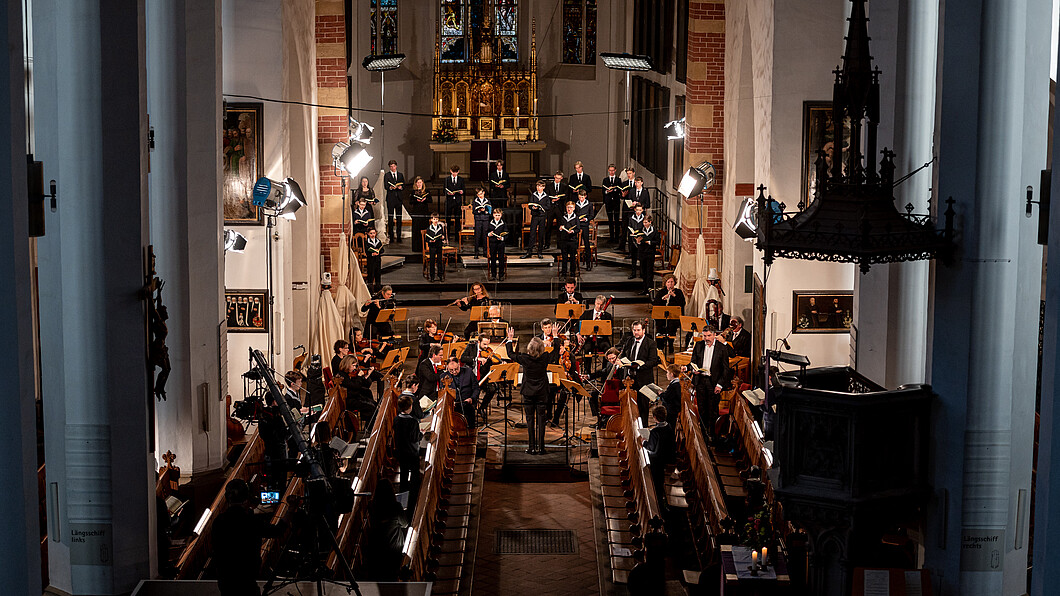 It is uttered with such ease, yet weighs heavy in its substance: the word ‘passion’. We transfer it from its definition of Christ's suffering and death - in the Christian faith symbolising humankind’s redemption from the clutches of evil and the overcoming of its mortality - to our own personal passions. We frivolously associate ‘passion’ with our own cravings and obsessions, willingly neglecting the suffering that is always inherent. This dimension of the word’s essence normally only enters our consciousness when we are forced to relinquish that, about which we feel passionate. Music is our passion. It is so infinitely more than an interchangeable pastime, a profession with which to earn our keep, a gratifying accessory to spice up festive occasions, or simply a diversion. Momentous music does not disperse - it gathers and congregates. And the fact that the celebration of important festivals by means of music is fundamental to the people of all cultures is no coincidence, but a thing of necessity. Music is essential: it can assuage adversity. We need it not only to give vent to our joy, for Easter jubilation and other moments of delight. More fundamentally, we need music as a comforter, as an empathetic companion in times of crisis, as a source of resilience in the face of existential fear and in confrontation with our own mortality.

That is why Passion music is of fundamental significance to Christianity. In this tradition-laden genre, both Christian and profane interpretations of the word coincide. Through Johann Sebastian Bach's music, Christ's Passion ignites our passion, the incomprehensible becomes poignant, and we become intimate with the unapproachable. Bach's Passion according to the Evangelist John is not, in contrast to its sibling work based on the Gospel of Matthew, often considered to be the greatest work of art of all time. It does not strive to be described with superlatives, it is more modestly cast and is formed of more compact dimensions. Its true greatness unfolds in spheres which cannot be measured. In the words of Robert Schumann, the St. John Passion is "more audacious, more powerful and more poetic than that of St. Matthew."

The opening chorus thrusts its way without mercy into events. Against the night-black background of throbbing, droning basses, the oboes wail in anguish. Restlessly encircled by the violins, the chorus calls in desperation to a “Herrscher” (“ruler”) facing a cruel death, singing of his “Ruhm” (“glory”)in agitated coloratura. For the dramatic scene of the capture, Bach interweaves the evangelist's account with direct speech and fevered turba choruses, until the first chorale proclaims what everything, including heaven-shredding torment and human failings, will be redeemed by: “O große Lieb...”  (“O great love...”).

The drama of events unfolds within the individual scenic units as well as in the so contrast-rich overall course of the work. In the first aria, “Von den Stricken meiner Sünden” (“From the bonds of my sins”), we join with the alto soloist, entwined in oboe dissonances, in the realisation of one's own desperate need for redemption. Shortly afterwards we follow the joyful steps of the believing soul as it sets out on the path to life and light with the soprano and the dovelike flute: “Ich folge dir gleichfalls mit freudigen Schritten, mein Leben, mein Licht” (“I likewise follow thee with joyful steps, my life, my light”).

The crucifixion is framed by the restless and disoriented bass aria “Eilt, ihr angefochtnen Seelen” (“Hurry, you challenged souls”) with instrumental and vocal interjections: “wohin?” (“whereto?”) This is followed by the unfathomable alto aria “Es ist vollbracht” (“It is finished”) with its unspeakably moving cello solo - an aria which was to subsequently inspire many a composer. Involuntarily, it bursts into the most stately of tones: “Der Held aus Juda siegt mit Macht” (“The hero from Judah triumphs with power”), cheered by the fanfares of the trumpet-imitating violins. The alto’s final “Es ist vollbracht” is sealed by the Evangelist: “Und neiget das Haupt und verschied” (“And bowed his head and passed away.”) What remains are the agonising questions of the bass: “Mein teurer Heiland, lass dich fragen...” (“My dear Saviour, let me ask you...”), accompanied - not answered - by serene tones of optimism in the chorale: “Jesu, der du warest tot, lebest nun ohn Ende” (“Jesus, you were dead, and now live forever”). Contemplation gives way to dramatic protest one final time: the curtain of the temple is rent asunder in a monumental descending scale - the earth quakes in the bass and violin tremolo. Finally, the soprano remains with one final aria: “Zerfließe, mein Herze...: Dein Jesus ist tot” (“Dissolve, my heart...: your Jesus is dead!”) Above the bitter lamentation of the oboe da caccia, do we hear a tender glimmer of hope in the light, unburdened tones of the solo flute?

Bach never gave his St. John Passion a conclusive and complete guise. He presented it to Leipzig churchgoers in his first Good Friday Vespers as Thomaskantor, on 7 April 1724 in St. Nikolai’s Church, subsequently subjecting it to fundamental revision before the performance the following year, 1725, in St. Thomas’s Church, whose turn it was to host the Good Friday service. Among the 35 to 40 participating musicians were six vocal soloists and, probably, twelve choristers. Bach revised the work once more preceding a performance in 1732, before, in 1739, beginning to produce a fair copy of this most versatile Passion. He had presumably planned a performance during the Passion season of 1739, which was prevented by the Leipzig City Council for reasons that remain unclear, wishing - as with the St. Matthew Passion in 1736 - to create a final, binding form of the work. This undertaking did not, however, advance beyond the first ten movements. Bach did, later, direct a fourth performance, returning to the first version in the case of many details, and opting for a particularly lavish instrumentation, including contrabassoon (bassono grando). This version of the St. John Passion was, in all probability, performed in St. Nikolai on 5 April 1749 - although possibly not until 1750, or indeed once again in that year, the year of Bach's passing). The complete performance material of none of the versions has survived. Most editions published of the work have combined elements from different versions to form a fifth version, which is most frequently performed today, although, of course, never heard in Bach's day.

Throughout his life, Bach had little choice but to - and was able to - react to changing performance conditions as pragmatically as he was creatively. This is precisely what the pandemic is now forcing us to do. May the unique community that music creates and demands also bring us together in the digital space and lend us support and sustenance in this turbulent Passion season.