It has been known for visitors to Leipzig to stand in front of the concert hall on Augustusplatz in some confusion, asking themselves: "That's meant to be the centuries old Leipzig Gewandhaus?" How can Felix Mendelssohn Bartholdy, Arthur Nikisch and Wilhelm Furtwängler have conducted in this "house with a hat", as the formerGewandhauskapellmeister, Václav Neumann, scoffed?

They did not, of course. Two other Gewandhäuser in Leipzig bore witness to the concerts directed by this illustrious trio: Mendelssohn in the Gewandhaus in Universitätsstraße, Nikisch and Furtwängler in the "New Gewandhaus" in Beethovenstraße. The hall on Augustusplatz is, therefore, the third Leipzig Gewandhaus and the second not to have anything to do with the original purpose from which the halls took their name - Gewand being the somewhat antiquated word for garment; a Gewandhaus was the building catering for a city's textile trade.

The first Gewandhaus - a three-winged building located between Gewandgäßchen and Kupfergasse - was both the trading hall and the guildhall of Leipzig's cloth merchants. The name does, however, tell only half the story. The ground floor of the wing bordered by the Universitätsstraße was the civic arsenal (Zeughaus)until 1828, containing the city's armaments and ammunition.

The civic authorities approved the construction of Leipzig's first dedicated concert hall within this building, the completion of which requiring but eighteen months. Having been held at the "Zu den drei Schwanen" inn from 1743 until 1778, the Große Concerte("Grand Concerts") were continued in the newly-built concert hall from November 1781.

The far-sightedness of the concert society directorate - at that time a voluntary committee composed of a number ofLeipzig music-lovers - can only be admired today. They hired the new hall in the arsenal, but named their concert series "Concerts in the Hall of the Gewandhaus". This certainly proved to be a marketing coup of some magnitude: who knows whether a "Leipzig Arsenal" concert hall would have fostered such artistic excellence within its walls, or whether a "Leipzig Arsenal Orchestra" would have engendered the respect and adoration of the music world so willingly?

The hall itself contributed significantly to the burgeoning renown of the Orchestra. Constructed entirely out of wood, the hall "hung" in the upper floor of the building, not dissimilarly to a violin nestling in its case. The hall acted not only as a resonance chamber, but reverberated itself - very palpably an additional musical instrument complementing the orchestra on stage.

The audience of up to 500 witnessed Mozart's only appearance in Leipzig, Clara Wieck's first public piano recital and two of history's most celebrated piano virtuosi, Carl Maria von Weber and Franz Liszt. Leipzig's music-lovers were treated to Berlioz, Brahms and Wagner conducting the Gewandhausorchester and were privileged to experience the first performances of an astonishing canon of masterpieces which have since established themselves amongst the most beloved in all music, including Beethoven's Fifth Piano Concerto "Emperor", Schubert's C major Symphony "The Great", Mendelssohn's Violin Concerto and Schumann's First Symphony "Spring".

It is little wonder that the popularity of the Gewandhaus concerts rapidly increased beyond all expectation. In order to cater for the demand for tickets, the auditorium was subjected to several modifications over the years - each alteration, however, at the expense of the hall's acoustic.

Around 1860, deliberations concerning the construction of a new concert hall began in earnest. The Gewandhaus management hoped to find a suitable site direct in the city centre, whereas the City Council favoured locating the hall towards the outskirts of Leipzig, in the hope of stimulating the inception of a whole new neighbourhood. And so, indeed, it turned out: after two-and-a-half years building, the inauguration of theNeues Gewandhaus (New Gewandhaus) in December 1884 sparked the evolution of the Musikviertel (Music Quarter).

In contrast to the original Gewandhaus, the new hall was not owned by the City of Leipzig, but by the Gewandhaus Concert Board itself. The Great Hall - "an acoustic vessel of, evidently due to both luck and genius, best possible dimensions" - accommodated 1,500 listeners, the Chamber Hall 500. Many of the musical greats of the age appeared at the New Gewandhaus: Bruckner at the organ, Hindemith on the viola, Stravinsky at the piano. Brahms, Grieg, Tchaikovsky and Richard Strauss were all to grace the podium at the helm of the Gewandhaus Orchestra.

In 1892, a memorial to Felix Mendelssohn Bartholdy was unveiled in front of the New Gewandhaus. 44 years later, in 1936, the Nazi regime decreed that a monument in honour of a "full-blooded Jew" would cause public offence and ordered its removal. In 1933, the Jewish Gewandhauskapellmeister Bruno Walter had already been issued with an occupational ban. Walter was never to return to Leipzig.

The Neues Gewandhaus suffered a direct hit during bombing in February 1944. The destruction of its home resulted in the Orchestra leading a somewhat nomadic existence, resorting to performing in a number of halls around the city until, in 1947, a home of at least provisional permanence was found in the Congress Hall of the zoo.

Over thirty years were to pass until Leipzig was able to proudly call a new concert hall its own: the (second) New Gewandhaus on the south side of Karl-Marx-Platz, the present-day Augustusplatz.

The third Gewandhaus was the only concert hall to be built in the GDR (former communist East Germany). Gewandhauskapellmeister Kurt Masur initiated the campaign for its erection and collaborated closely with the team of architects and acousticians throughout the 57 month construction period.

"Gesang vom Leben" ("Song of Life"), Sighard Gille's striking mural encompassing a vast area of the main foyer's sloping ceiling and the largest contemporary painting of its kind in Europe, forms the Gewandhaus's figurehead. Illuminated at night, it radiates through the glass façade onto Augustusplatz.

The amphitheatrical Great Hall accommodates an audience of over 1,900, the Mendelssohn Hall approximately 500. The Great Hall is crowned by its imposing organ, built by Schuke of Potsdam, with its four manuals, 92 stops and 6638 pipes. The organ's frontispiece proclaims the motto "Res severa verum gaudium" - "True pleasure is a serious affair". This tenet, attributed to the Roman philosopher Lucius Annaeus Seneca, has accompanied the Gewandhaus since its establishment in 1781. In the first Gewandhaus the motto was emblazoned high up across the front wall of the concert hall; in the second Gewandhaus it adorned the facade above the main entrance.

The Gewandhaus plays host to an extremely eclectic range of concerts and events, numbering approximately 800 per year. The artistic backbone of the Gewandhaus programme is formed by the concert series given by the Gewandhausorchester and the organ recitals in the Great hall. The Mendelssohn Hall provides an ideal ambience for the various chamber music series, as well as conferences, symposia, lectures and an enormous diversity of other events.

For those visitors to Leipzig posing the question why the Gewandhaus in front of which they are standing does not appear to be quite as old as its venerable tradition had led them to believe, regular guided tours of the building are on offer. In addition, models of the three Gewandhauses of 1781, 1884 and 1981, along with explanatory texts and pictures, are on display in the main foyer (open weekdays 10am-6pm; Saturdays 10am-2pm). 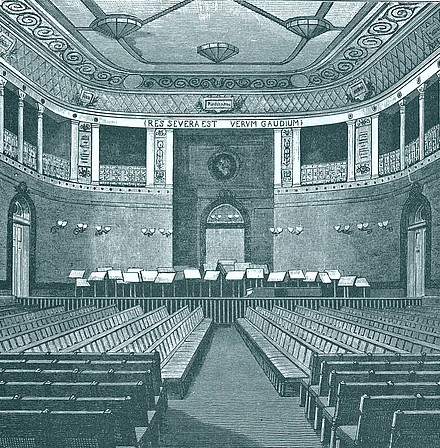 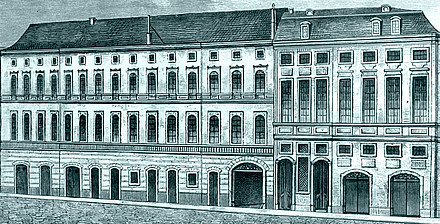 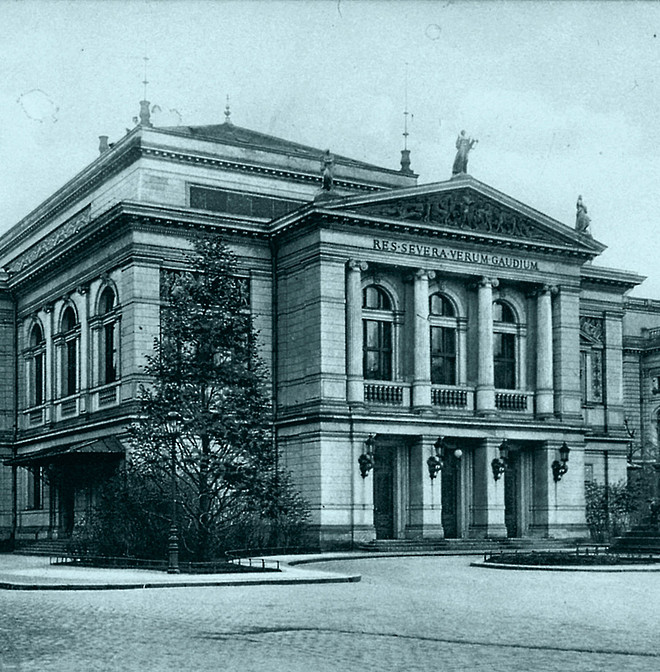 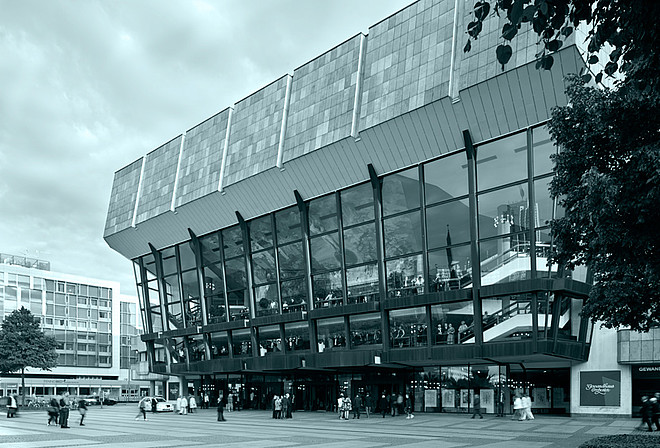 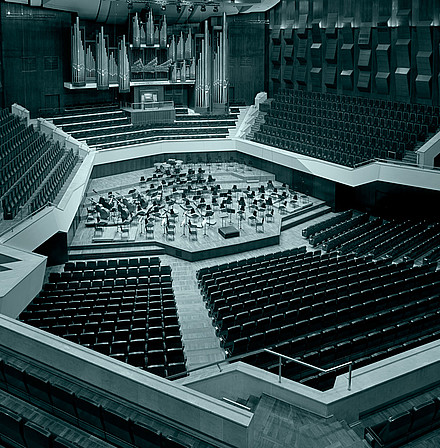 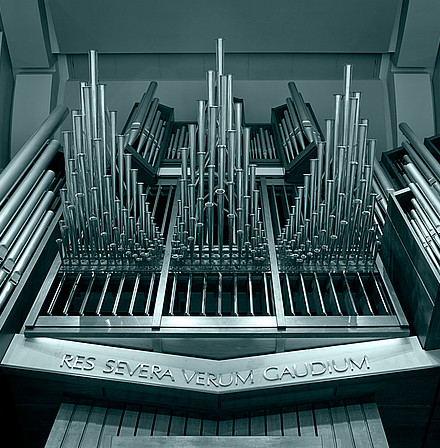