Valentino Worlitzsch has established himself as one of the leading cellists of his generation, regularly convincing international juries, audience and critics alike with his captivating performances. To this effect, he received first prize, audience prize and two special awards at the German Music Competition in Bonn and won first prize and two special awards at the International Music Competition “Pacem in Terris” in Bayreuth; he earned both prize- and audience-awards at the “Ton und Erklärung” Competition and was awarded special prizes at the Grand Prix Emanuel Feuermann in Berlin and at the Leoš Janáček International Competition in Brno. Furthermore, he was a semi-finalist at the prestigious ARD International Music Competition in Munich as well as at the International Tchaikovsky Competition in St. Petersburg and was distinguished as the best participant ex aequo at the Pierre Fournier Award in London. Valentino Worlitzsch studied with Bernhard Gmelin in Hamburg, Michel Strauss in Paris and Wolfgang Emanuel Schmidt in Weimar, where he has also been teaching as Schmidt’s assistant since 2015. Parallel to his cello studies, he also studied piano under Karl-Heinz Kämmerling as well as conducting under Nicolás Pasquet.

As a soloist, Valentino Worlitzsch has performed with, among others, the Amsterdam Sinfonietta, the Beethoven Orchestra Bonn, the Düsseldorfer Symphoniker, the Frankfurt Radio Symphony, the Munich Chamber Orchestra, the Munich Radio Orchestra and the Royal Chamber Orchestra of Wallonia and has already played at notable venues such as the Berliner Philharmonie, the Elbphilharmonie Hamburg, the Wigmore Hall in London or the St. Petersburg Philharmonia. In addition, he passionately devotes himself to chamber music – his partners include Elisabeth Brauß, Tobias Feldmann, Volker Jacobsen, Albrecht Menzel, Nils Mönkemeyer, Eldar Nebolsin, Christopher Park, Natalia Prishepenko, Wolfgang E. Schmidt and William Youn. He is also a regular guest at renowned festivals such as the SchleswigHolstein Musik Festival, the Festspiele Mecklenburg-Vorpommern, the Rheingau Musik Festival, the Ludwigsburg Festival and the Heidelberger Frühling. 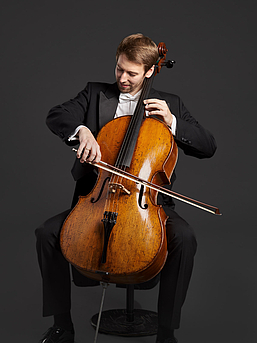